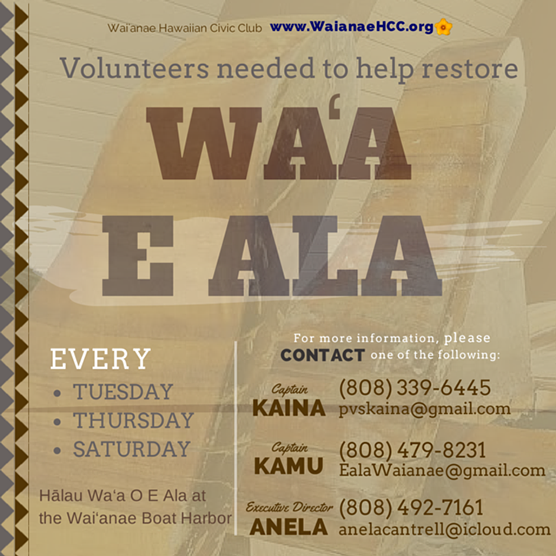 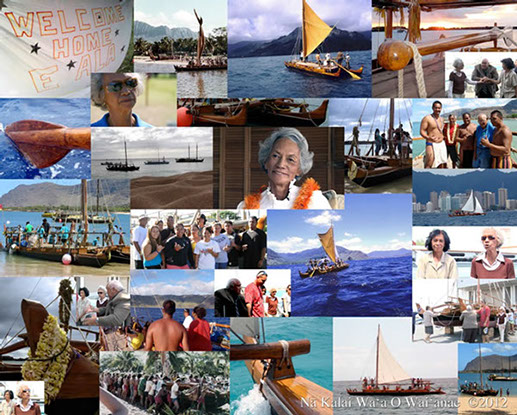 THE LEGACY OF E ALA.

In 1981, on the rugged coast of west O‘ahu, E Ala was conceived by a peoples desire to know their origins and to create their destiny. A movement that gained momentum in the 1970's, known as the Hawaiian Renaissance. The vessel is of ancient design: a 45-foot long double- hulled voyaging canoe with a crab-claw sail and decking that sits on a 12-foot beam. The double-hulled canoe, or wa‘a kaulua, is hand-steered with a large paddle called a sweep; it is one of a handful of its kind in Hawai‘i crafted in modern times. A well-known example of this vessel is Hokule‘a, a 62-foot voyaging canoe of similar design that in 1976 and 1979, sailed back from Hawai‘i to Tahiti and back. This proved that ancient Polynesians navigated over 2,500 miles of open ocean without the use of nautical instruments. E Ala was built inspired by their historic voyages.

The late Georgette "Gege" Kawelo, was born June 3, 1940. In 2004, after the passing of her sister, Paige Kawelo Barber (former President), Aunty Gege took the reigns of President with the Wai‘anae Hawaiian Civic Club. Aunty Gege supported using E Ala, as a floating classroom to promote Hawaiian culture for area students and residents. In addition to learning basic sailing canoe maintenance, students learn Hawaiian way-finding, an ancient Polynesian method of navigation whereby a captain reads the positions and paths of stars, the sun, clouds, winds, ocean swells and the flights of land-based birds; to find his or her way across the ocean.